Readers must have heard of the Bankruptcy and Insolvency Act 2016 but some of you must not be clear about what exactly it is. Insolvency is the inability to timely pay back the debts owed by a person or a company to their creditors. However, insolvency is followed by filing of bankruptcy as a legal procedure in case of inability to pay outstanding debts. To resolve this problem, restructure the company assets and attempt to repay creditors, the Insolvency and Bankruptcy Code, 2016 was brought into picture. Read the information below for a better understanding of IBC Act 2016.
Listen to this article

Have you heard about Abhimanyu of Mahabharata? He knew how to enter the Chakravyuh and how to compete as well. What he was not aware of was how to exit the Chakravyuh, and that is where his defeat was affirmed. The same used to happen with the corporate sector in the past few years. Provisions for entry in the corporate sector were eased through introduction of LPG (Liberalisation-Privatisation-Globalisation). Even competition in the market was paved way for via eradication of monopoly assured through the Competition Act, 2002. But, the winding up of a company was a very tiresome and never ending process which proved a chronic disease for the Indian economy over time. When so many laws proved inefficient, the Insolvency and bankruptcy (IBC) Code 2016 arrived as a blessing. Hereunder, various facets of how IBC 2016 uplifted the Indian market for business have been dealt with.

Background of Insolvency and Bankruptcy Code

Before the Bankruptcy and Insolvency Act, there were laws like SICA (Sick Industrial Companies Act) and Securitization and Reconstruction of Financial Assets and Enforcement of Security Interest Act (SARFAESI) which did not perform up to the mark which they were introduced for. In 2015, Asset Quality Review was done by the Reserve Bank of India which disclosed high NPA rates in India. Since the pre-existing laws were insufficient for resolving the problem of creditors, banks and the companies, the Bankruptcy and Insolvency Act India came into force in 2016. The IBC 2016 is termed a Code because it is an amalgamation of various pre-existing Acts dealing with the issues around Bankruptcy and Insolvency Act. These laws also include SARFAESI Act, 2002 and the Sick Industrial companies (Special Provisions) Act, 1985. Look out for banking lawyers near me for local assistance in your area.

Purpose of Bankruptcy and Insolvency Act

The Insolvency and Bankruptcy Code was introduced in 2016. The aim behind IBC 2016 was to resolve claims of creditors of insolvent companies, non-corporate entities like LLPs/firms and individuals, and also the pressure over the banking sector due to Non-Performing Assets (NPAs). The track record of Bankruptcy and Insolvency Act 2016 affirms the backdrop idea while introducing the Code through wide success of resolving defaulting corporations. The IBC Code 2016 empowers financial creditors with an increase in recovery rate. As per World Bank 2020 report on Ease of Doing Business which assesses business-friendly regulations, India ranked 63 improving 79 pointers since 2014 which is a great achievement. Another golden feather is the out of court resolution of insolvency after the advent of IBC 2016. Earlier without Insolvency and Bankruptcy Code, the corporate insolvency matters used to burden courts as well as the people affected by it. Now, debtors are paying money to banks even before declaration of insolvency in anticipation of default or not to cross the red line and come in the radar of the National Company Law Tribunal. The two way sword that prioritizes resolution followed by liquidation has effectively helped resolving insolvency cases.

Framework of Bankruptcy and Insolvency Act, 2016

IBC 2016 brought along a team of professionals who were handed over the responsibility of regulation and adjudication of matters. With the help of flowchart provided below, it may be noted that the Bankruptcy and Insolvency Act India appoints two bodies, Regulators and Adjudicators. The Insolvency and Bankruptcy Board of India is the top notch regulatory body. It consists of Insolvency Resolution Agencies, Insolvency Professionals and Insolvency Utilities. On the other side, the adjudicating bodies include National Company Law Tribunal (NCLT) and Debt Recovery Tribunal (DRT). It must be noted that DRT has been associated with insolvency since its establishment in the 1990s. However, NCLT has been handed over the tasks through IBC Code 2016 only. 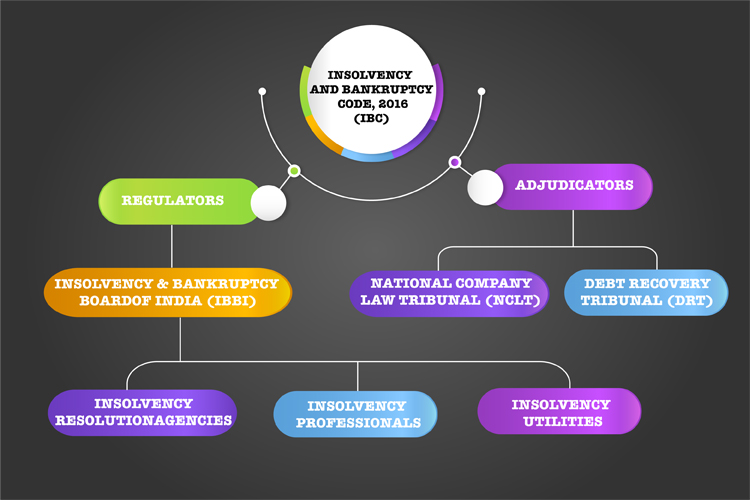 Process for Insolvency and Bankruptcy

The Bankruptcy and Insolvency Act 2016 lays a four-step process for resolving the debts or liquidating the company assets based on what suits best as per facts:

It has been a few years since IBC Code 2016 came into existence. But the effectiveness of the same is assured through the following pointers:

Where there is a will, there is a way. And where there is a good law and its implementation, there are great results as well. A well drafted law may lose its essence due to a few loopholes in it. Since a company is not a real identity but some real persons, i.e. humans act with the company’s face, it is quite often for those people to mess things up which diminishes the company’s ability to remain in business. Wrapping up such business has been eased through the Insolvency and Bankruptcy Code. However, the problem of NPAs is not yet fully resolved which needs in-depth research and treatment.

How Many Types of Corporate Law are There? - Let's Find Out

Fraudulent initiation of Insolvency Petition 5 Response(s)
hey, if, any person initiates the insolvency resolution process or liquidation proceedings fraudulently or with malicious intent for any purpose other than for the resolution of insolvency, or liquidation, as the case may be, the adjudicating authority may impose upon such person a penalty which shall not be less than one lakh rupees, but may extend to one crore rupees. So if you have proof and docs you can filea petition. if you like my answer pls give me a good rating.

INSOLVENCY - I AM NOT ABLE TO PAY ALL MY DEBT 2 Response(s)
If the Learned Court accepts your insolvency petition, then the said court will pass an order directing that all the proceedings relating to the said person or his movable & immovable assets, should be stayed and no further order shall be passed in respect of those ongoing cases.

Insolvency filing 1 Response(s)
No. In money matters it never extend.Pauper application under CPC may be filed.

Insolvency on the basis of , provincial Act 1920 1 Response(s)
Dear Client, An insolvency petition is filed at a district court having jurisdiction in which the debtor resides or carries on business. If the debtor has already been arrested or imprisoned, then the insolvency petition can be filed where he/she is in custody.
Expert Lawyers in Bankruptcy and Debt Banking Corporate and Incorporation