Difference Between Agreement And Contract In India

All squares are rectangles but all rectangles are not squares!! Now that was an easy high school fact which people good at Mathematics can grasp. For law students, the context switches the main terms used here. It turns to “All Contracts are agreements But all agreements are not contracts”. But aren’t these two terms one and the same thing? Know the difference between agreement and contract with the explanations below.

Law of Contract in India

The legislature enacted the Indian Contract Act in 1872. However, various amendments have been brought in the same since it was enacted two centuries back to fulfill the needs that arose with time. The law mainly governs the very basic needs of a society, i.e. contracts. People often misunderstand a contract with what has been reduced to writing and has been signed by the parties concerned. In day-to-day lives, we all make contracts, whether we are at the grocery shop or a supermarket, accepting a job offer letter or renting out a property. One may resort to a civil lawyer in Kolkata for property related contracts in Kolkata before signing one. Understanding the basics of a contract is a must. Consultation with contract lawyers in India can save them from any unexpected trouble.

What is an Agreement in Contract Law?

Where there is an offer made by one person and is accepted by another, it is a promise. As per the Section 2 (e) of the Indian Contract Act, where there is a promise between two parties involving a certain consideration, it is an agreement. The most important part is that as per the Section 2 (h) of the same Act, when an agreement is legally enforceable, it becomes a contract. Thus, the key difference between contract and mere agreement is that an agreement in compliance with the applicable laws is a contract. However, an agreement that lacks compliance with the requisite legal conditions, it remains an agreement which is not enforceable in the court of law. 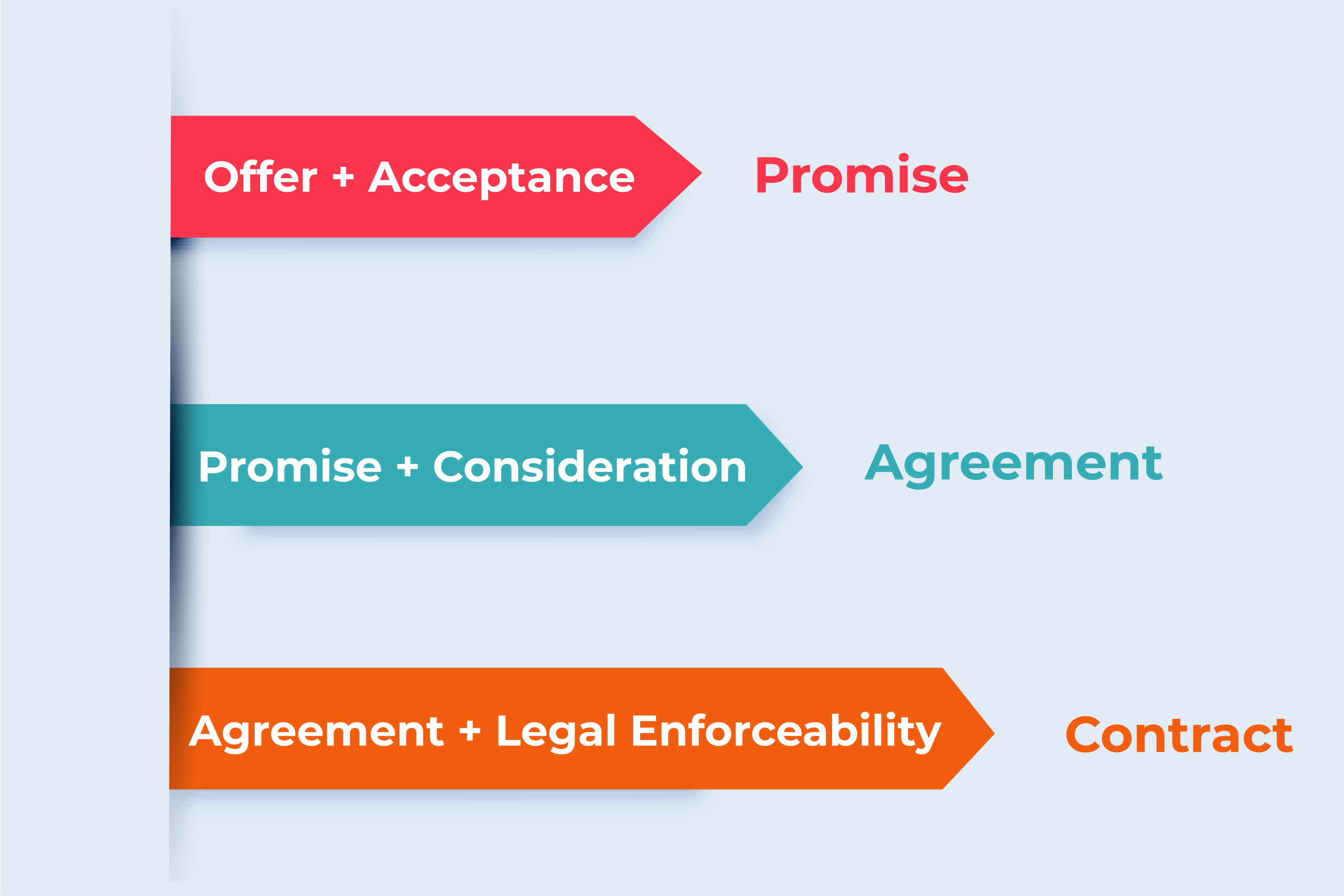 Essentials of a Contract

The difference between agreement and contract can be depicted through the above essentials of a valid contract whereby offer, acceptance and mutual consent sum up what we call an agreement.  However, all the additional pointers altogether in this regard make up a contract. When one of these elements is missing, it is no more a legally enforceable contract but a mere agreement. In case of confusion involving some financial interests in Kolkata, a lawyer in Kolkata may help.

Difference Between Agreement and Contract with Example

People often refer to a contract as well as an agreement synonymously. However, the difference between contract and mere agreement is huge. “All Contracts are agreements, but all agreements are not contracts” is the first term which law students get to hear when lectures under law of contract begin. What is an agreement in contract of law is crucial to understand for those whose interests are at stake, be it a law student or someone planning to enter an official contract with another for business purposes. In Kolkata, it is better to contact a Kolkata contracts lawyer to understand the basic context in this regard.

It should be noted that an agreement is one of the many ingredients of a contract. However, an agreement on its own does not constitute a contract as per law. An agreement between two people to have a cup of tea by contributing together is not legally enforceable one. However, an agreement to buy tea bags in return of a certain amount of money is legally binding and thus, forms a contract. The table below reiterates the key difference between agreement and contract in a clear manner. It directly refers to what has been provided under the Indian Contract Act, 1872.

Legal Difference Between Agreement and Contract

How Many Types of Corporate Law are There? - Let's Find Out

Meaning and Difference Between Sale and Agreement to Sell

Why You Should Not Agree For All App Permissions?

Incorporated in Frustration of Contract

Service agreement regarding query 4 Response(s)
Look Poonam these are fraud companies and they do not do anything except trap you and then take money from you. You need not worry nothing will happen to you. Just ignore there calls and mails. If you want you can speak to me.

Data entry -What should I do 1 Response(s)
Dear Sir, The above said company seems not genuine and also the legal notice is also not genuine. Not to respond to such legal notice and they cannot do any harm financially or otherwise to you.

Stamp duty penalty 1 Response(s)
Dear Sir, The description given by you is so lengthy, please make it short and re-submit, as experts have no time to spare as this is free and charity work.

Tenant Not sign renewable rental Agreement 2 Response(s)
Then in that case your tenant has accepted that he has not paid rent. As per the legal notice. So threaten him with eviction notice. Moreover, you need to challenge that deed or agreement which he is claiming valid before the court.
Expert Lawyers in Contracts and Agreements